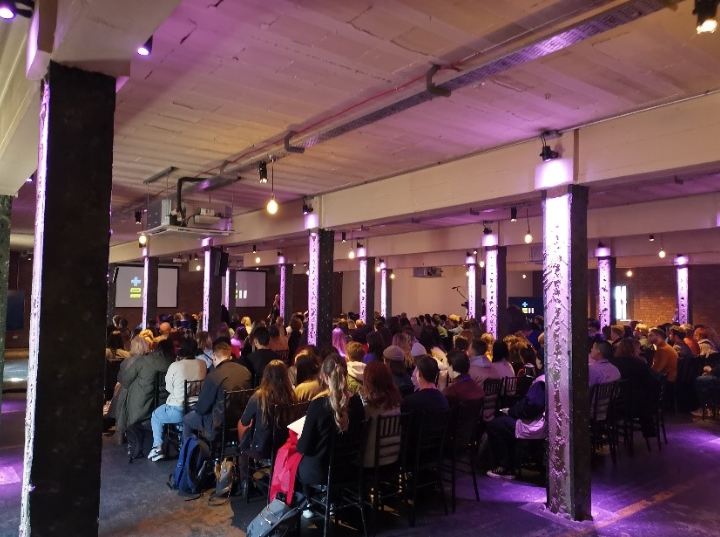 On Friday (18th March 2022), a PINC student and I got the chance to go on a trip to a Graphic design event called 2+2 that took place in the Victoria Warehouse, near the Manchester United ground. We both got there by taxi, which made the journey easy.

Once we got there, the first task was to listen to a talk from two guest speakers which I found helpful but a bit too long for me. I say that because I don’t find it easy to listen to people speak for a long time. It was however, good to hear of the ideas put forward by the speakers.

After a mentor explained that the brief was to find a way for Gen Z to share data from intelligent WEJO vehicles to help the world in a way that appeals to people of older generations, we began to come up with our ideas in a group with a PINC teacher and the mentors who came to help every group. An idea we had was using the data from vehicles to help a person find their way to the hospital by finding a fast route that isn’t going to mean they cannot help their partner deliver their baby and get to see the birth of their child. In addition to that, we thought of colours that would help us sell the idea of using technology to preserve memories. We thought Pink would be a good colour as it would give a potential customer the feeling that the memories, they can keep will be vivid.

I got the chance to ask a mentor named Kieran some questions I wrote beforehand such as, what got them interested in graphic design and what advice would they give to a young person who wants to have a career in this field. They explained that off the back of university, he found a part-time job working for a glasses factory doing social media, he made a video promoting the glasses and the manager offered Kieran a full-time job making videos, which sparked an interest. The advice Kieran gave is not to be too discouraged if a person says your work isn’t for them as it’s an ‘options-based industry’ if you are proud of your work keep going and it doesn’t mean you can’t have a career in Graphic design. His company, Pixel Films make lots of food and sports videos, someone who is not a sports fan will think ‘this video will not interest me’ this has not stopped Pixel Films from adapting their craft to various fields and products, as the style they work in is what they enjoy.

We started at 9am and finished at 2pm (PINC college hours), the event itself ran from 9am till 7pm. The other colleges were taking part in a competition where the most appropriate creative solution won a day with the founder of Social Chain, Steven Bartlett.

The other PINC student and I received a certificate of alumni for 2+2 2022 at the end of the event. The event was enjoyable and very insightful, I am appreciative of the work that 2+2 (Creative Resource) do in the community and field. I hope more people & PINC students can attend more events like these in the future.