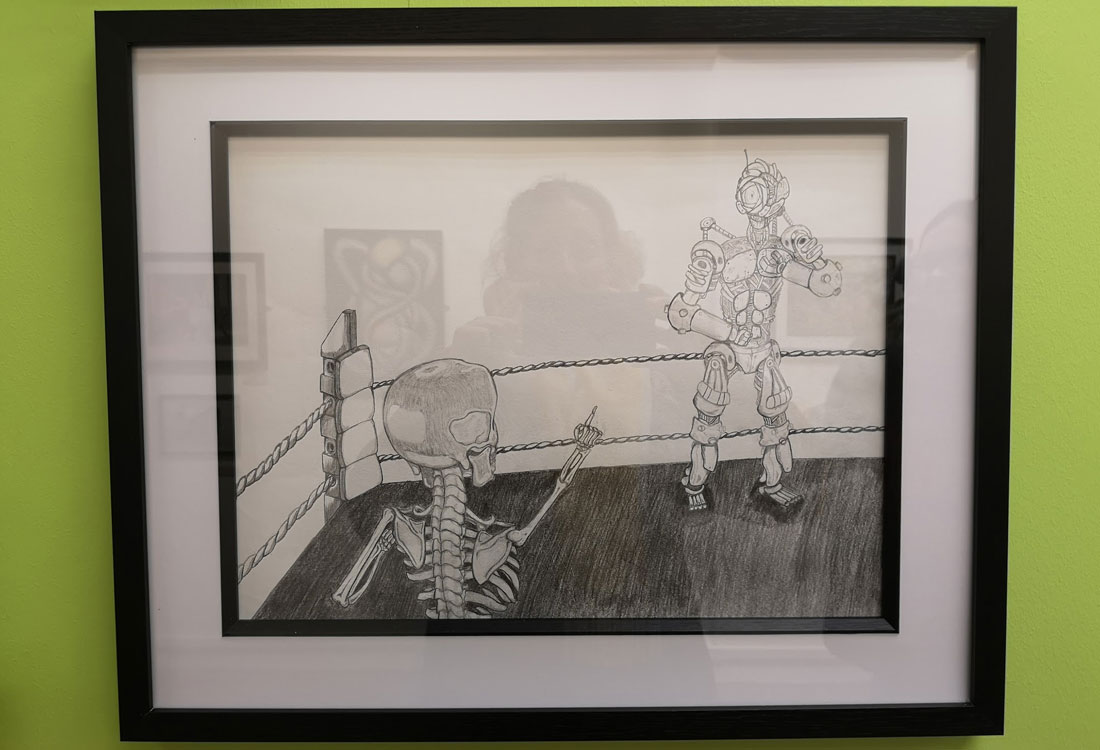 I was feeling curious about what I was going to see. I didn’t know what to expect as it was my first time going to an art exhibition.

After getting there we had a look around at Theodore Major’s work and some others. I didn’t really get any feelings from looking at the work but was more interested about how it was done and what techniques they had used.

After collecting our thoughts together about what we had seen I tried to recreate a part of one of Theodore’s artworks which is entitled ‘Fighting Skeletons’.

It looked like Theodore did his skeletons quickly and not in proportion. I tried to make it more correct, but my first try didn’t go the best but still feel it was more accurate than Theodore Major’s skeleton.

After a couple of days, I got back to working on making the skeletons that I draw more accurate to look like a real skeleton. This also helped with my exhibition review on Theodore Major and the Turnpike exhibition.

Midway through my 2nd skeleton for my review I decided to do an art piece for Wigan Steam and as I was working on making my skeletons look more realistic I thought it would be a good Idea to do something with skeletons and so that’s what I did.

The piece I did was about Old and New, depicting a skeleton for old and what I did for new was a mechanical robot.  I tried to work in Theodore Major’s style by making them fight. So, it became Old vs New. The title of my drawing is ‘Robot V Skeleton: Post-Industrial Stand Off’.

In a lot of Theodore Major’s skeleton artwork, it looks like the skeletons are slaving away working until they turn to dust which is why I picked a skeleton and a mechanical robot for my art piece as in everyday life machines are slowly replacing people in jobs.

Within the first couple of days of doing art at the mill I looked at the steam engine and the parts it used, what brought an interest in machine parts and that led in to looking at robots and how similar the mechanical parts are. This helped me in designing the robotic parts I used for my art piece.

When doing the art piece, I only used pencil as it’s what I’m best at using and it helped me get more precise detail and shading.

I was ok at doing the mechanical parts, so I was able to make the robot look like a used factory robot that has been non-stop working showing exposed wires and parts.

One part of the robot that I had trouble doing was the head, when thinking about the head I had lots of different ideas but I wanted to keep it some what modern and not so much human like to get the feel that a machine can do what a person can do but better and more precise.

As for the legs and arms I wanted them look big and tough that they won’t crumble under any amount of pressure to make them give the feeling and look that they can do better jobs then what multiple people can do.

After getting the robot finished and looking good, I moved on to the skeleton. After thinking about how I wanted the skeleton to be I decided to do an angle that I haven’t done before to get more of a fighting feel to it.

The type of angle I did the skeleton was above the shoulder and facing away from you so you could see the back of skeleton. The skeleton was facing the robot in an old west standoff, eyes locked. You could only really see the back of the skull on the skeleton and a part of its ribcage, It was a new way of looking at skeletons for me and I had a hard time trying to get it look the way I wanted. In the end I achieved what I wanted and was happy with how it looked.

It was coming close to the deadline to enter in to the Wigan Steam exhibition and I was almost finished I just had to do some sort of background/foreground, I think this was the part I could of done a lot better as I left a lot of white on the background and I wanted more of an atmosphere to the drawing that brings out the fight between Old vs New, but after spending so much time on the skeleton there was little left to polish the rest.

My art piece was sent off just before the deadline, I didn’t feel much I wasn’t worried or excited but more curious about the other people that entered in to the exhibition, what type of work have they done, how they did it, what have they done that I haven’t, how many people was able to get in. I was just curious.

The day of the exhibition at Wigan Steam and I went to see all the pieces of art that got entered and maybe meet some of the people that did them and as I entered the building I could feel the warm atmosphere.

All the artwork was to the right of the entrance, there was many different types of drawings and pieces of art there from all different ages of people and all pieces of artwork were very good.

It showed me how different my art piece could have been if I did it differently like what if I used colour or different materials could it made it look better or worse. it showed me how much more I can improve it inspired me.